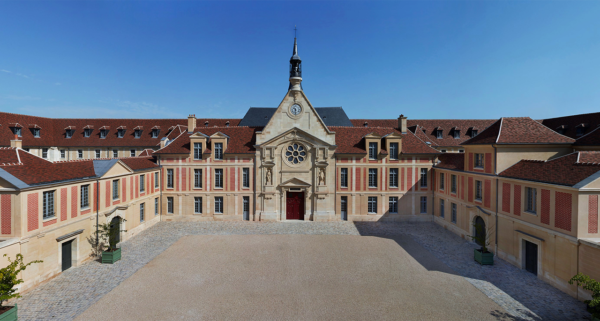 What was the biggest challenge that you encountered during the renovation?

The structure itself was in a worrying state. In some places it was in extremely poor condition. The hospital was modified during the last century to accommodate patients, and some of the work done, such as putting in floors or windows, caused considerable damage. That meant we had lots to do in terms of upgrading the structure of the building itself, including the masonry and framework. The dressed stone blocks were especially damaged and finding replacements was tricky. Fortunately, the original quarry in the Oise region still exists, so we were able to replace the period stones with almost the same materials.

So you had to use the same stone cutting techniques?

The art of stone cutting has stayed more or less the same since ancient times. Tools and techniques did not change much until the late 18th century. This might seem odd – even a little disconcerting to the layperson – but for craftsmen, it is a great comfort to use such tried and tested methods and materials. For the site at 40, rue de Sèvres, we brought in skilled artisans who had already worked on high-profile renovations, including Notre Dame Cathedral and the Hôtel des Invalides in Paris. We had collaborated with many of them in the past, so teaming up again simplified matters greatly on a day-to-day basis.

Some parts of the building had been destroyed over the years: what sources did you use to reconstruct them?

We didn’t have much, just a few photos and diagrams, nothing very precise. Old city development plans showed us where the buildings were located. We also used photos from the mid-20th century to rebuild the kitchens, which were knocked down in the 1960s. And sometimes, we had to use our powers of deduction. An analysis of the architecture revealed a number of patterns and repetitions, which allowed us to reconstruct the right wing as accurately as possible.

In terms of the general improvements, the restoration of the façades and roofs, I am very satisfied with the results. The vaulted chambers are extraordinary and restoring them was one of the project’s great delights. The gardens, meanwhile, are starting to flourish. It’s too early to make an overall assessment of the renovation because we have to let time do its work: the buildings have a new feel for now and will need a while to settle into the Parisian cityscape. But given the state of the Laennec Hospital when we began, the site has obviously been transformed. We have come a long way!

The Laennec Hospital was the first classified building to receive the French HQE environmental label: how did this affect the project?

We included special insulating and soundproofing features, especially for the framing, flooring and walls. Basically, we had to bring the building into compliance with modern environmental and safety rules, which it had never had to meet before. It wasn’t easy, but we managed!

How was the Kering Group involved in this project?

Kering had appointed its own architect and gave him a free hand to decide on interior aspects, from partitions to flooring and paint. But we worked together on many points. Thanks to Kering, we were able to rebuild the connection between the east and west wings, which had been blocked by lifts. This restored the building’s natural flow. I had imagined that the basement under the main courtyard would be used for large meeting rooms, but Kering’s decision to divide the space into smaller meeting rooms was a great one. I believe that good architecture is all about slipping in seamlessly to enhance what already exists.

How do you feel about the site’s inclusion as a stop for European Heritage Days?

It’s a wonderful idea, because being forgotten is the worst thing that can happen to a building. The new-look Laennec Hospital deserves to be put on display, and visitors will take great pleasure in touring it.